Larvae are commonly referred to the newly hatched termites.

They are young ones develop to become soldier, nymph, or worker termites. Just like adult termites, larvae survive on cellulose-based materials.

But, in order to break down the cellulose, they need the guidance of worker termites. It means larvae can’t break the cellulose without any guidance. Moreover, larvae termites molt severally before they’re completely grown.

Identifying them is very important as they can cause damage incidentally.

Even though they don’t invade wooden structures and hole to look for cellulose, larvae will wait for the worker termites. Thus, the workers will be responsible for the destructive work and get them food.

They are small in size. Actually, their size is almost similar to termite eggs. The majority of larvae is 2.5 mm long or less than 1/10-inch.

Larvae are almost translucent or white in color. However, adult nymph, as well as worker termites, gave the same pale coloring. Thus the color alone won’t tell whether it’s larva or not.

Baby termites look like similar to the smaller versions of workers. Instead of hard outside shell, they have a soft body. Furthermore, they have six legs, a different head, and straight antennae.

How to Identify If You Have Termite Larvae

If you want to identify whether you have termite larvae, you’ll need to follow some steps. The three easy and simple steps are as follow.

Aforementioned, termite larvae have soft bodies. Thus if you notice insects that has a soft body and the antennae are instigating from the head that’s different from the rest of its body, then it’s likely to be larvae.

Baby termites are translucent and white control. However, if you notice insects that have a pale color, darker head, and a white body they might be soldier termites.

Termite larvae are estimated to be 1/10-inch or 2.5mm long. Also, if you notice insects that size is similar to termite eggs, then those are termite larvae or baby termite.

What Does Larva Eat?

Just like older termites, baby or larvae termites eat cellulose. But worker termites will break the cellulose down since larvae can’t digest it alone. 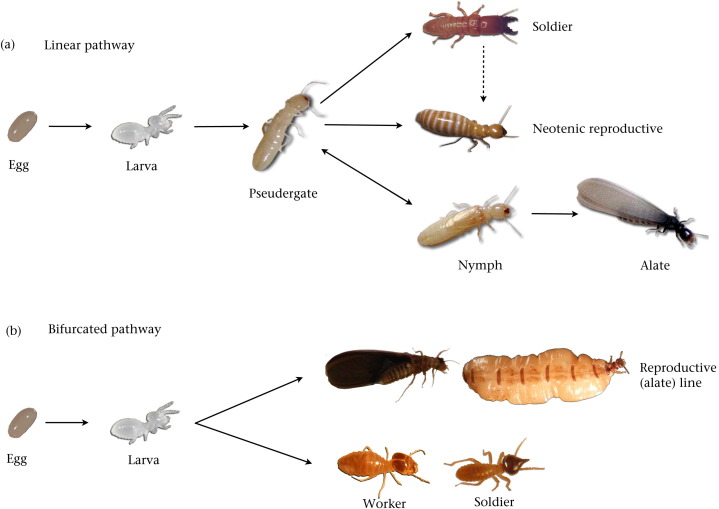 Aforementioned, baby or larvae termite molts many times before they’re completely developed. With this process, the larvae will become either soldiers, workers, or reproductives depending on the needs of their colony.

But in most cases, termite larvae turn into worker termites, since their colonies need a higher request from this caste. But, these termites will become soldiers when needed.

In addition, larvae, which turn into alates will have the ability to reproduce as well as develop wings.

When the eggs of the termite hatch, the hatchlings are commonly known as termite larvae or baby termites.

Every larva will go over a series of molts to turn into a reproductive, worker, or soldier termite. Molts is the process of developing and shedding its exoskeleton. In fact, the queen and king of termites will utilize chemical signals or pheromones to appoint the role every larva will be playing in their colony.

As stated above their role will depend on the needs of the termite colony. A larva that grows into workers may possibly:

Termite larvae which become nymphs may possibly molt in order to become alates or primary reproductives which develop eyes and grow wings for swarming. Or a secondary reproductive which supports the egg production in the colony.

If wanted, other workers might molt to turn into a tertiary reproductive which support the production of the queen’s eggs.

It is important to note that not all termites will continue to molt and will become reproductives.

When the colony demand for more worker termites, some nymphs may molt in a hostile way. As a result, they will lose their wings bud and turn into false workers or pseudergates.

The Difference Between Termite Larvae and Other Insects 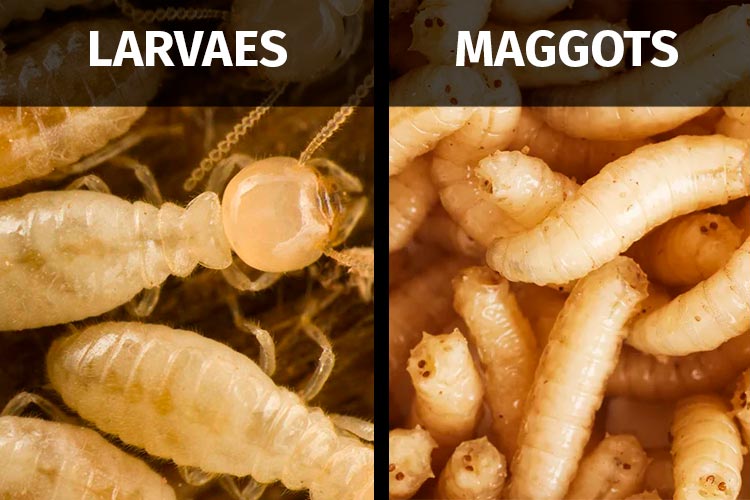 Even though they’re characteristically much smaller at around 2.55, termite larvae stand an even similarity to maggots. The baby or young termites don’t have a hard outer shell of the older ones. But in most aspects, termite larvae look like the adults.

Maggots, on the other hand, guise nothing like the older flies which they will eventually turn into.

As a matter of fact, they are a completely different color and don’t have wings.

Thus, if you notice a group of tubular and small insects of fluctuating sizes, most probably it is juvenile and adult termites. If the swarms have a uniform size, there’s a higher possibility that those are maggots.

However, if they do it won’t be visible. Moreover, they might have legs, but the rest of their body has a tube-like shape. Maggots can be found in different rotting items such as decaying plants and even old food. 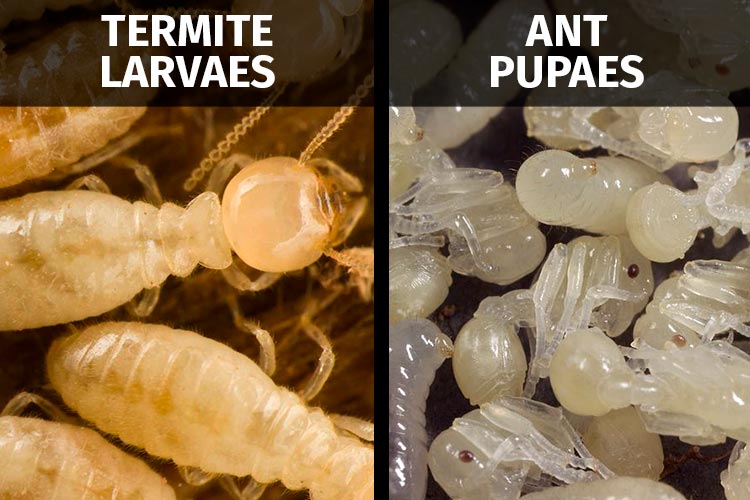 Termites may possibly bear a resemblance to ants.

But the ant’s body has a narrow waist, while the termite’s body is straight and smooth at the same time. Most homeowners are not certain if the creature invading their property is ant or termite. Meaning to say, differentiating ants and termites can be very confusing.

With that said, termite’s larvae and ant’s pupae are extremely different. However, if you are not sure if you have termites or ants, it is best to look at the larvae. Better yet, seek help from a professional termite inspector.

As what mentioned earlier, the larvae of termites bear a resemblance to smaller versions of adult nymph and worker termites. In addition to that, they have antennae, legs, segmented and separated head.

Ant pupae is looking like transparent adult ant, and definetly has some similariaties with termite larvae, but at the same time it’s very different. Close inspection will help you to understand what kind of insect you have.

Termites aren’t only the insects that eat wood. Beetles, on the other hand, look very different to termites. In fact, beetles have harder and darker bodies, whereas, the termites have softer bodies. Not only that they are also protected with fine hair.

Beetles larvae, especially powderpost larvae are white in color and c-shaped. Along with their backs, these creatures have small spines.

TIP: If you’re not sure if the larvae that you have spotted is termites or beetles, it’s best to hire a professional exterminator.

The nematodes are a proven remedy that helps in killing termite larvae. This remedy is non-segmented and small worms which are parasites to several home pest. However, nematodes must be planted and kept in areas where they’ll not be spoiled by the sun’s UV rays.

RELATED ARTICLE: How To Get Rid Of Termites In Your House?

Larvae termites aren’t as dangerous as older species of termites. But when they’re not treated and identified immediately, they may possibly cause a significant amount of damage in your property. Thus preventive measures are needed.