Home > Termites > Flying Termites vs. Flying Ants: How to Spot the Difference

Flying Termites vs. Flying Ants: How to Spot the Difference

The correct identification of the insects you’ve seen in and around your home often makes all the difference when it comes to pest control. Knowing how to identify termites, in particular, means that you’ll be able to implement the correct pest control methods.

Although the two are similar at first glance, there are many visual cues that might point to one or the other. So today, we’re going to closely examine the case of termites vs ants.

Differences Between Flying Ants and Termites

There are several differences between flying ants and winged termites, but let’s begin with the most obvious. Of course, ants are a much more widespread species.

There are about 12,000 different types of ants that are spread out across almost every continent. In fact, other than the garden variety black ants we all know, there are also white ants, red ants, and many others.

Scientists estimate that the true number of ant subspecies is closer to 20,000. While most of these subspecies are practically harmless, if occasionally annoying, some of them can be dangerous.

Termites, on the other hand, are almost always dangerous. Because of their diet, they can go through crops and homes in a flash. Having a termite invasion in your home is a particularly tricky situation. After all, they can create serious vulnerabilities in a building’s wooden structure.

Fortunately, termites aren’t as omnipresent as ants. There are just over 3,000 subspecies of them, although they naturally inhabit tropical and subtropical regions.

Unfortunately, though, they’ve also managed to colonize all continents except Antarctica. So we can essentially count on them showing up wherever they feel like. But still, not everything with wings is a termite. So let’s continue investigating the termites vs ants dilemma by tackling their appearance.

If we were looking to identify these two species by sight, their sizes wouldn’t be much help. Both termites and ants are about an eighth of an inch to an inch long. However, termites have been known to squeeze into 1/32 to 1/64-inch cracks. That kind of feat has even prompted some people to believe that termites can eat through cement. Luckily, these claims aren’t true.

Although size won’t help us settle the matter of termites vs ants, their appearances are actually quite distinct. The difference is three-fold. If we happen upon a dead insect or capture a specimen, close examination of the body, the antennae, and the wings should give us our answer.

The body of an ant is easy to recognize. There are several distinct body parts. So the head connects to the torso which connects to a larger part in the back. An ant, unlike a termite, has a pinched waist and a thin neck. On the other hand, termites have somewhat distinguishable heads on their bodies and no distinct waistline.

The different species might also differ in their color, but not always. Ants can be black, but there are also red and white ants. Termites typically have a light-colored body which darkens with age.

However, while the insects’ colors may not give any helpful clues, the shape of their antennae does. Ants’ antennae have a 90-degree bend in the middle, while termite antennae are straight. Also, termites have beaded antennae, while ants’ antennae are smooth.

Finally, termites and flying ants have different wings. Both have two pairs of wings, and both get rid of them in similar ways. Ants and termites actually ditch their wings during mating season. They certainly can’t navigate the ground with wings on their backs.

However, their wings are quite distinct. Ants have larger front wings and smaller hind wings. Termites have two big pairs of wings that are almost transparent.

Don't Have Time for Research?
Call us and get professional pest control service.
Call now: (844) 489-4485 to get professional pest control service from trusted exterminators in your local area.
(844) 489-4485 Click to proceed a call
So if you ever find a pile of what looks like light or clear flower petals, look for a variety of sizes. If all of the “petals” are the same size, the pile might be the shredded wings of a termite colony.

In the case of termites vs ants, there isn’t much of a distinction in behavior. If we took into account various ant subspecies, we could find several that behave similarly to termites. Take, for example, the comparison of carpenter ants vs termites.

Both of these types of insects typically live in wooden structures. However, there’s a clear difference. Namely, termites eat the wood, while carpenter ants merely inhabit it. Carpenter ants much prefer to eat other insects. After all, they are predators.

In addition to the habitation similarities between some ants and termites, the two species have a similar colony hierarchy. Both have one or more queens and worker insects, or drones.

Both termites and ants start out as eggs that the workers in their colonies care for. As we’ve already established, both ant and termite colonies can have queens. These insects typically live much longer lives than the drones.

Ant queens live up to 30 years on average, while ant drones manage 1–3 years. Similarly, termite queen lifespans can last up to 50 years, while regular termites live for about 2.

We can add yet another similarity to our termites vs ants comparison — both use their wings in a similar way. In their youth, termites and ants are winged insects. They use their wings to find food for themselves while they’re immature. However, once they start to reach maturity, their wings have a final purpose.

Termites and ants both have a life phase we know as the nuptial flight. Essentially, they all come out in the open and begin swarming in order to pair up. Termite swarming also has the additional purpose of finding a new home for the colony.

Once they find an appropriate spot, they create a chamber in which the termite king and queen can mate. After that, neither of them has any cause to leave the nest again. The insects in the colony will then shed their wings, leaving them behind in a pile. 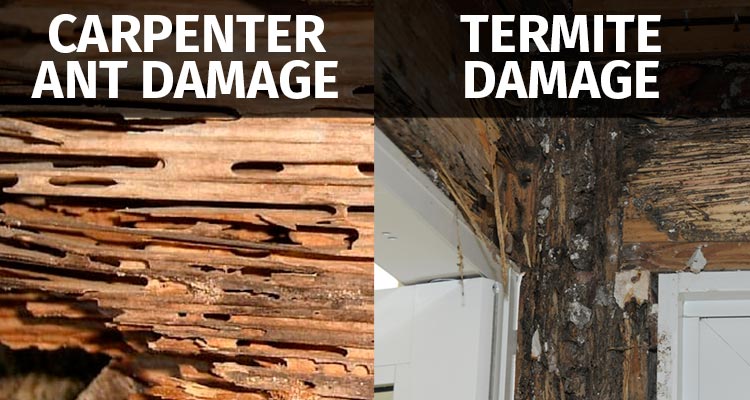 Finally, we’ve reached the biggest difference in our termites vs ants comparison. Ants tend to be omnivore scavengers. Although, as we’ve mentioned in our carpenter ants vs termites segment, some of them are predators. Still, most ant species prefer to eat sweet liquids, which is why you can lure them with sugared water.

On the other hand, termites get the most nutrients out of cellulose. That meant that their diet just so happens to include wood, paper, cardboard, and many other products we need.

However, one of the most worrying things about termites is their ability to structurally damage buildings. And once they’re in the neighborhood, you can be sure that your home will be next. After all, termites move underground. If the foundation of a building is partially wooden, it’ll be as good as an invitation to the pests. 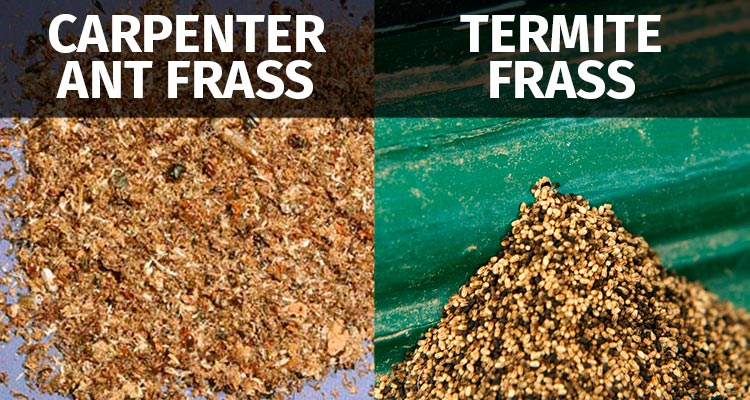 One of the biggest indicators of a termite infestation is the odd sighting of what looks like sawdust. If there’s no cause for it to be where you’ve found it, it may actually be insect waste. But you won’t get far unless you know which insect left the droppings.

As it turns out, we must add another commonality to our carpenter ants vs termites comparison. Both of these insects produce similar-looking debris or frass. Therefore, finding a pile of sawdust is a good indicator that you have termites. However, precisely because carpenter ants can sometimes produce a similar product, you’ll need to confirm the identification in other ways.

When ants or termites set out to find new homes for their colonies, they typically look for a convenient spot in the ground. As they dig and borough, they might create a small hill above ground. However, if you find such a hill, ants are the most likely culprit. In fact, a termite hill is a much more worrisome structure than an ant hill. Still, since it’s so similar to an ant hill, it often goes unnoticed. So the correct course of action would be to use deterrents for both termites and ants.

Anyone who’s ever seen a large termite mound has been half terrified and half impressed. The fact remains, you don’t want to see one of these deformities in your neighborhood. The subspecies of termites that are responsible for the largest termite mounds only live in Africa, Australia, and South America. Some mounds in Brazil are 10–33 feet tall. They can also be incredibly thick.

Although these termites aren’t native to North America, you’ll want to be careful just the same. At the end of the day, our termites vs ants comparison isn’t just about the theoretical. It’s about staying practical and vigilant in order to be able to defend your property.

Our primary goal was to help you get to know the difference between these two insect species in order to help with their identification. The only thing you need to do now is to figure out how to defend against these pests.