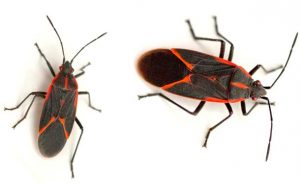 Boisea trivittata commonly known as the boxelder bug is a North American insect named after its primary host, the boxelder tree.

Wherever you may find boxelder trees, from eastern Canada throughout the eastern United States; the bugs are likely to be there too.

They are also pests to maple and ash trees. They are however a bigger nuisance to homeowners than they are to agriculture.

These home invaders congregate in your walls and warm rooms, especially during cold months. When they are disturbed or agitated, they give off a foul odor that repels any potential threat to them. Apart from entering your home uninvited, these bugs also leave accumulated droppings and dead comrades all over the place and inside your walls. 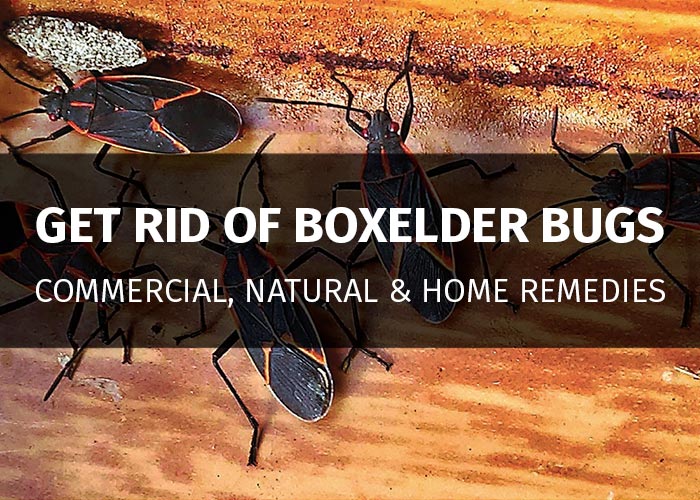 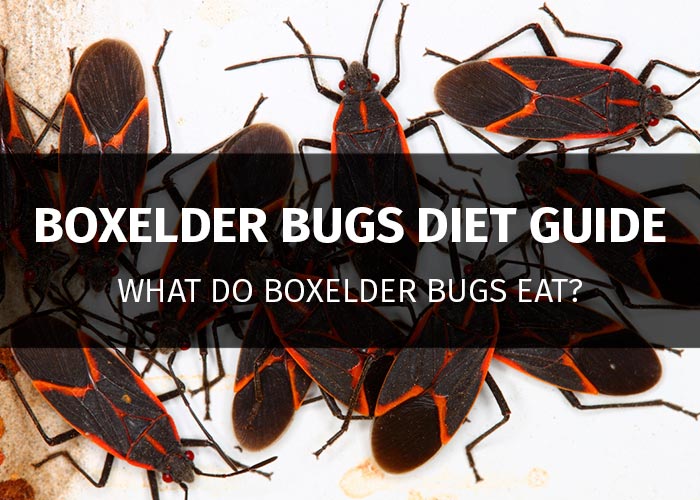 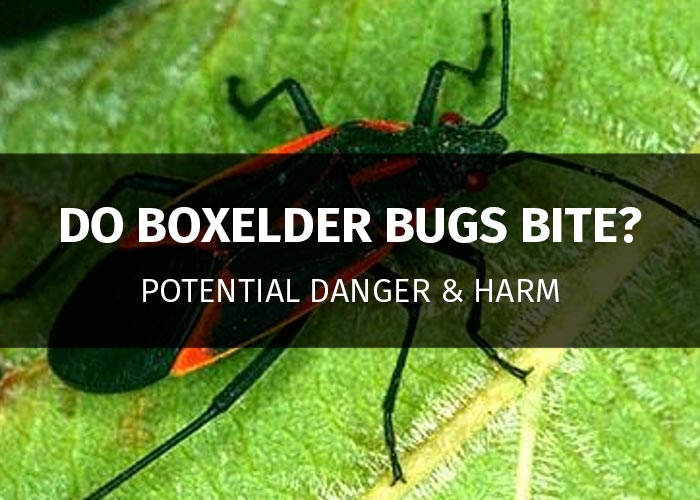 READ MORE
In this article you will find show
1. Identifying The Pest
1.1. Color
1.2. Size
2. Life Cycle
3. Signs Of An Infestation
4. Where They Live and What They Eat
5. Prevention And Control
6. Habits of The Boxelder Bugs
7. What Problems Can Boxelder Bugs Cause?
8. What Are The Habits Of The Boxelder Bug? 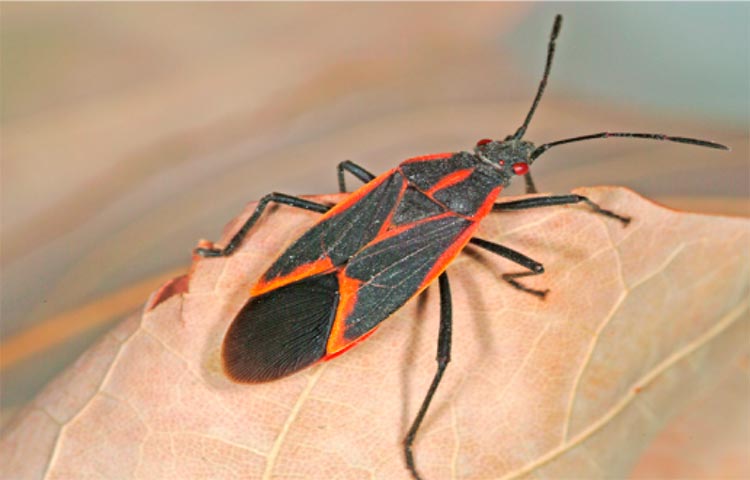 The adult is usually a dark brown to blackish color with three orange-red stripes. Two of them are on its side and join at the thorax while the other runs down the back of its head.

It measures about half an inch and has papery wings like the kind large roaches have. On the underside, an orange hue covers the bug’s abdomen. If you observe the back of the bug closely, you may see the slight formation of veins on its corium. 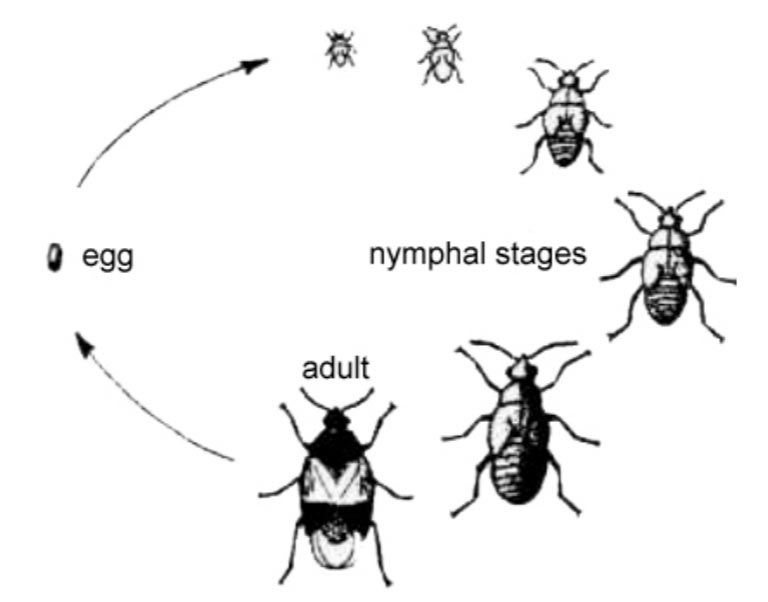 It undergoes three distinct stages in its life:

Often, this critter lays eggs on the leaves and seed pods of its primary host tree. In some instances, you might find them attached to the bark of the boxelder tree.

They are a yellowish cluster that begins to change color and turn red when the next stage forms.

After roughly two weeks, the eggs hatch into a nymph. The bug remains at this stage until fall when they start to become adults.

They live within the loose tree bark or invade your home until spring. In these warmer weathers, the bugs stay close to the ground feeding. They then begin their mating rituals after two weeks of warm weather.

To complete the cycle, females fly up the boxelder trees where they lay eggs.

Signs Of An Infestation

Like with many overwinter invaders, their presence is only noticeable as winter approaches.

You might see these orange and black bugs around boxelder trees where they live during the warmer seasons.

If you leave your home during winter and return when the weather warms up, you may find some evidence that they were in your home.

Jars of flour or dry seeds that were left accessible may contain the bugs droppings or their dead relatives.

Where They Live and What They Eat

These tiny orange bugs tend to migrate depending on the temperatures.

During hot weathers like the start of spring throughout summer, they inhabit trees and scourge the ground for food.

When the weather gets cooler from late fall to winter, they migrate to warmer areas. These include houses and garages, typically anywhere where human inhabitants have developed heating and are shielded from the cold.

The best way to avoid an infestation is by sealing and repairing all the crevices and entry points that they may use to invade your home.

Alternatively, you could fumigate outdoor locations holding these bugs to prevent them from making their way into your home.

Getting rid of these bugs once they invade your home is a whole other affair.

If you choose to kill them while they inhabit your building, you may end up attracting dermestid beetles. Instead, use a vacuum cleaner to suck them up and provide some relief from their invasion.

After sealing and repairing potential entry points, eliminate any debris or places that these bugs could gather.

Other ways to prevent their invasion is by spraying trees and different outdoor habitats with horticultural oil when they begin to emerge.

Habits of The Boxelder Bugs

Their tendency to gather in large numbers is one of their unique practices.

Imagine these little black and red bugs taking over your home in large colonies. Apart from irritating the owner, they can cause damage to your plants and probably contaminate food.

On top of that, these critters are EVERYWHERE.

They are a source of contamination and can be quite disturbing to be around, especially if they release their foul smell.

As the cold approaches, they swarm in colonies to warmer spaces like your well-heated homes. They prefer the sun-facing sides of the building where they gather or female trees.

Although they are a minor agricultural pest, these bugs can cause cosmetic damage to fruits like peaches, apples or grapes during summer.

In conclusion, the boxelder bug can be troublesome to deal with.

The best way to save yourself from the horror that they bring is sealing off any entry points in your home.

Keep in mind that in winter, they make themselves comfortable at your own expense, colonizing your rooms and other inhabited spaces.

What Problems Can Boxelder Bugs Cause?

They are a nuisance to have around your home and can cause damage to your plants. They are also considered agricultural pests.

What Are The Habits Of The Boxelder Bug?

You will notice them gather on malls or floors if they invade your home. They like to migrate depending on the season and outside temperatures.