Types of Termites: A Guide to Different Termite Species

In the United States, there are more than 40 different types of termites. Each species have distinct behaviors which affect what part of the country they live in where they construct their nests and damage to homes. On the other hand, every species falls into one of these four main types:

Below, you will find more information about these different types of termites.

Main Types of Termites in the U.S 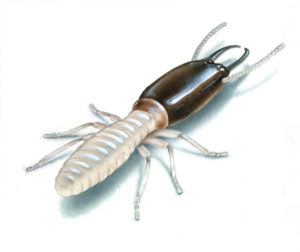 In the US there are six species of this type of termites. Subterranean termites, on the other hand, are the most damaging species in the United States.

These termites live in any part of your house houses particularly in moist secluded areas that are above the ground. In order to defend themselves from predators and open air, they are making mud tubes. They also created these tubes to gain access to different food sources.

This type of termite can be found in every state in the United States except in Alaska. In fact, subterranean termites are accountable for the widely held termite damage in the country.

What Do Subterranean Termites Eat?

These termites tend to eat the soft filaments of Springwood, and they leave the tougher summerwood behind. Moreover, the wood consumed by these termites look like honeycombs. Also, some if its galleries consist of fecal particles and dirt.

Aforementioned, subterranean termites are the most destructive wood insects. They can cause major property damage. The existence of these termites can be very hard to determine. Typically, their harsh damage is already done before they’re seen.

Wall and foundation damage, as well as carpet infestation, are the most common damage made by these termites. 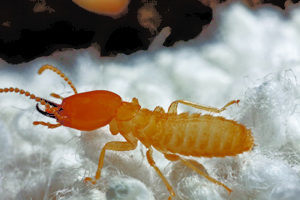 Formosan termites are species of subterranean termites that are organized to big colonies. They are also creating complex mud nests in the walls of your structure.

Unfortunately, once they infested your structure, controlling them has never been an easy task. Similar to other types of termites, they live in wooden structural parts of your home. As they continue to consume, they bore to woods in which they don’t have to create mud tunnels.

These termites are commonly found in these States:

What Do Formosan Termites Eat?

Mainly, Formosan termites eat the springwood of vulnerable timbers. Not only that they also eat materials that cellulose-based including cardboard, paper, and wood. Formosan workers, on the other hand, eat cellulose materials and depend on flagellates and bacteria in their gluttons to support the consumption of materials.

Formosan termites could multiply rapidly and destroy wood structures faster than native subterranean termite species. Even though Formosan workers don’t eat wood rapidly, they can also destroy wood in just a short period due to their size. 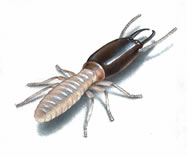 Unlike subterranean termites, drywood termites don’t need an excessive amount of moisture. They can perfectly live in structural timber or hollow wood that is commonly used for house construction,

Drywood termites live as well as develop their colony in wooden structures. They hardly move out when it comes to searching for food. Simply because the wooden structure that functions as their living quarters also serve as their food source. They also in voids outside your home and wood near a water heater and leaking pipe.

Across the U.S. these termites are found in:

What Do Drywood Termites Eat? 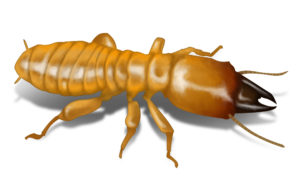 This type of termite is larger compared to other species. Typically, dampwood termites are creating mud tubes because they need to stay damp. Furthermore, they are living in the wood structures that have a high moisture content. They also live in tree logs and stumps, and even on different fences. Similar to drywood termites, this one can also survive without the presence of soil.

Dampwood termites are mostly found in the following states:

Occasionally, they can be seen in Southern as well as Southwest Florida.

What Do Dampwood Termites Eat?

Dampwood termites like eating moist wood. Apart from that, they are also eating decaying or dead tree logs and stumps. Even so, they hardly infest buildings because they have a very low moisture content.

Similar to the other three species of termites in this list, dampwood termites can also cause severe damage to homes. Often, these termites weaken homes by tunneling out the support beams. Unluckily, this kind of damage can lead to expensive repair.

Hopefully, this article gives you a better understanding of the different types of termites in the United States.

Nevertheless, if you notice any sign of termites in your home, it is best to get rid of them as soon as possible. Or seek help from people who are knowledgeable when it comes to dealing with different types of termites.

How to Get Rid of Lizards: Repellents & Home Remedies